Information nights at Manifold Heights Baptist Church in Geelong and at Surf World on Beach Road in Torquay on Thursday 18 September at 7:00pm, and a ‘Town Declaration Day’ in Moriac on Sunday 14 September at 2pm

Geelong Council seeks public submissions regarding onshore gas extraction methods with a deadline on 26 September. Taking a stand on this should not be about party politics. This is about our common future and what we would like it to be. It is important that citizens voice their concerns in this matter.

Come and ask questions to a panel of independent authorities about onshore gas mining’s impact on health, jobs, economy, environment, climate and ethics.

We will be watching a short film which focuses on why communities in Gippsland are opposing onshore gas extraction – also known as coal seam gas extraction, CSG mining or ‘fracking’.

Initially, Geelong Council provided only three links on their submission page which are in favour of gas mining. We contacted Council and criticised this unbalance, and the page has since been updated with three more links to organisations which are independent of the gas mining industry.

If you would like to become acquainted with views independent of the industry, we suggest you look below on this page where we have posted various Gas Fact Sheets with information from Doctors for the Environment, Beyond Zero Emissions, Australia Institute, and The Climate Institute, and more.

Dr Merryn Redenbach is an advanced trainee in Community Child Health with the Royal Australasian College of Physicians. She currently works for Doctors for the Environment Australia as Research and Liaison Officer on the impacts of fossil fuels on health. Her recent medical work includes child protection, child, adolescent, infant and maternal mental health, and she also has research experience in the impact of air pollution on child health.

Dr Rye Senjen is a senior researcher with the National Toxics Network and also works with a number of international NGOs. She is internationally known for her work on nanotechnology and has also written on coal seam gas, bisphenol-A, sustainable hospital flooring and the hazards of biochar. She teaches business ethics and sustainability at the graduate and post graduate level.
» For National Toxics Network’s briefings on coal seam gas, see: www.ntn.org.au/resources

Ben Courtice writes for Yes2Renewables.org and has worked as a staff writer for Beyond Zero Emissions – a Melbourne-based climate solutions and renewable energy think tank. He is secretary of the Moorabool Environment Group who engaged with Moorabool Council on supporting a moratorium on new coal and coal seam gas in the council. The Council finally addressed this issue at a council meeting in May 2013.


» The event is listed in Council’s event calendar on: www.geelongaustralia.com.au/events 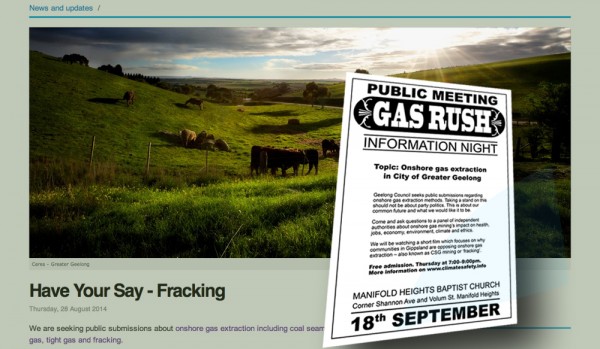 • Have Your Say – Fracking


News and updates from City of Greater Geelong 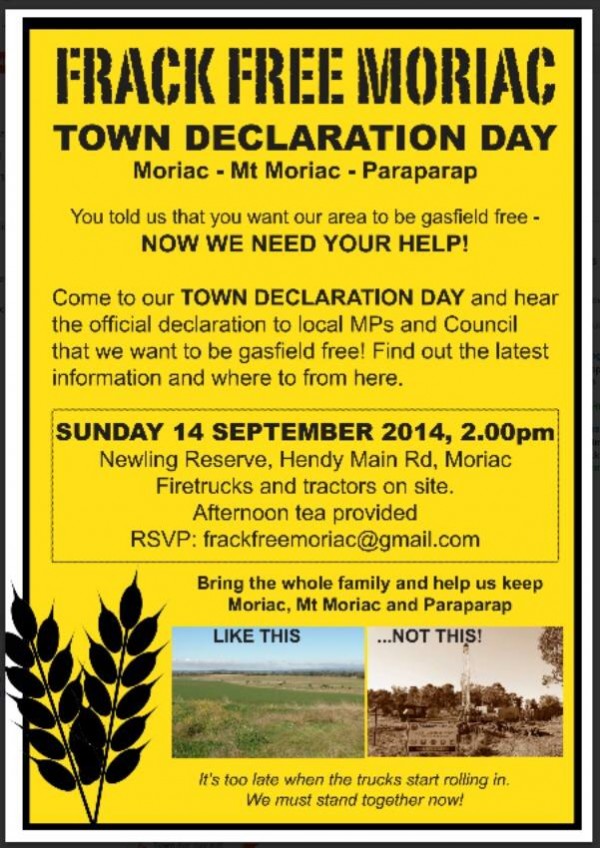 The organisers have had confirmation that all candidates for South Barwon will attend: Andrew Katos, Andy Richard, and Lisa Ashdowne. Also federal members of parliament Sarah Henderson and Richard Di Natale will be coming. And Lloyd Davies, candidate for Western Victoria. Surf Coast Mayor Rose Hodge and councillors will be attending as well.

No sitting MP has ever attended a declaration day, and to get all of the candidates in one room is outstanding. Numbers matter in politics. So, come and show the politicians that you care about this, and that you want them to place a permanent ban on fracking.

We need a huge crowd to support the anti-fracking cause. so if you could pass on the details to your friends and followers this morning it would be greatly appreciated.