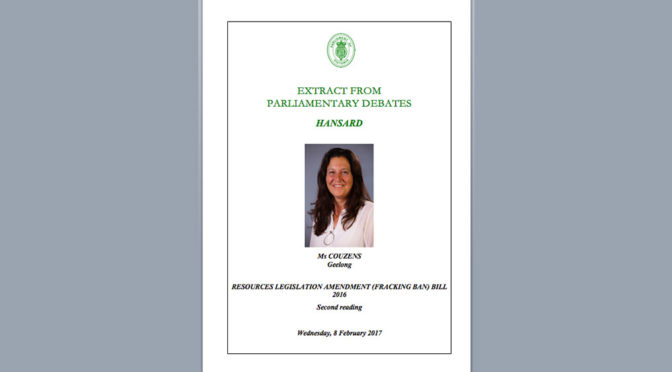 Ms COUZENS (Geelong) — It is a great pleasure to rise to speak on the very important Resources Legislation Amendment (Fracking Ban) Bill 2016. I am really proud that I am debating this bill today. I am a bit confused about what the opposition is doing. We keep hearing different approaches to the bill, but we will see.

I want to start by thanking the Minister for Industry and Employment for his tireless work and consultation with the community, along with the Premier of Victoria. I also want to thank and congratulate the local communities who actively campaigned for this ban. As the Premier highlighted, this is a victory for our local communities. In particular I want to put on public record the hardworking commitment of people like Alison Marchant, who is in the gallery today, and all the dedicated people in the Geelong community who have worked hard on this issue for a very long time.

It is people like Alison who help leave positive legacies for our future generations, which is really, really important. Over the last, probably, three or four years I have had the opportunity to speak to many people about their concerns about fracking. It has been really interesting, particularly talking to young people, because young people are much more up to speed with what is going on in our community than we think they might be. Certainly when I was a kid I would never have thought of these issues. They are much more articulate and they have a much better understanding of the issues that are impacting our environment in particular. It has been really heartening, and it has filled me with confidence to talk to the up and coming young people in our community.

I also wanted to share with the chamber a couple of stories that I heard from young men who left Geelong to look for work some years ago and went into the mining industry. They worked in fracking operations in New South Wales and Queensland. I caught up with them not long ago. They actually left that industry because they knew the damage that they were causing for the companies they worked for. They had concerns for their own families and for the future of our community. I thought it was really interesting that they actually left those jobs and came back to Geelong purely out of concern for what fracking was doing to the environment. They had firsthand experience. They had to deal with protesters, particularly in Queensland, which they found very difficult because they knew what they were doing was not right. I wanted to share that story because I think it is important that we do not underestimate what our younger generations are thinking and the concerns that they have about our environment.

There is no doubt that this was a serious issue for people in Geelong and the Geelong region. During the election campaign I was approached many times by many groups and individuals asking what we were going to do about this particular issue, so I am really proud of our local community and the work they have put in. I know it has been hard for them, but they have stuck at it. Our farming communities were concerned, but there was also concern from the community about the great risk to our reputation as a clean, green region. Our farming communities, agriculture, tourism, magnificent beaches, national parks and food and wine trails were all put at risk. Our diverse communities were all getting together and talking about this issue. They came together out of genuine concern. They were concerned about the impact of fracking on farms; the environment, including through water contamination; local industry; and the health and wellbeing of our community.

The people that came together to work on this particular issue formed Frack Free Geelong, Gasfield Free Torquay, Frack Free Grovedale, Frack Free Moriac, frack free Freshwater Creek, No Fracking Birregurra, Gasfield Free Deans Marsh and lots of other local environment groups. They are a diverse group of people from many different backgrounds, industries and political views, but they all had one thing in common — that is, the fight for a ban on fracking. The three local government areas in the Geelong region — the City of Greater Geelong, Surf Coast shire and Colac Otway shire — all passed motions in favour of a ban and contributed to the parliamentary inquiries into onshore unconventional gas activity in Victoria.

Sixteen hundred community members, groups, experts and representatives from the resources sector made submissions to the inquiry. When the Honourable David Davis, a member for Southern Metropolitan Region in the Legislative Council, wrecked that process, resulting in four minority reports, the Andrews government went out and spoke to farmers, industry and community groups across our region. I note the comments earlier about the Minister for Resources in particular not getting manure on his boots and all those sorts of ridiculous comments. That sort of statement is just ridiculous. The minister, the Premier and lots of members of Parliament were out there talking to the community about what affected them and what their concerns were, and they were actually listening to the community. And we heard the message. I heard the message, and it was very clear: they did not want to support fracking, they did not support the long term damaging effects of fracking, they did not support the risks to people’s health and wellbeing, they did not support the destruction of our environment and water supply, and they did not support the damage to tourism in our region.

Tourism was another big issue for many people and so many small businesses that rely on tourism had grave concerns about what fracking would do to their industry and their reputation in the community.

I note that the member for South Barwon in his contribution today mentioned that he sent a letter to the Premier. It is good to hear that he is supporting this bill. A number of local groups and individuals have complained recently that he did not return their calls or respond to their requests for him to outline what his position was on the ban and how he would respond to this bill, but I am pleased to hear today that he is actually supporting the bill. These groups are certainly not happy with the member for Polwarth, the member for South West Coast or a member for Western Victoria Region in the Legislative Council, Simon Ramsay, who have never responded to their requests to have a discussion about fracking. Fracking would impact on all of these seats, but these members did not listen. They were not interested in listening.

The federal member for Corangamite has also been silent. She has provided no support, nor has she listened to her local community on this issue.

Ms Thomas — We know where she stands now.

Ms COUZENS — Yes, we do. This is not surprising given the commentary that is coming out of the federal Liberal government. In fact the federal Minister for the Environment and Energy has been highly critical of the ban, calling it disappointing. The federal Minister for Resources and Northern Australia, a Nationals member, echoed those comments. Then of course there were the Prime Minister’s comments yesterday, and I quote:

There they are, with this ideological, left approach that the Labor Party adopt, sitting on all of this gas and they are not prepared to touch it.
This is about them hiding the truth and their game of trickery. They do not want anyone to notice that the leap in gas prices is because of their longstanding federal policy. Those opposite cannot be trusted to continue a ban on fracking. Their masters in Canberra will have them change their tune down the track. This is a very real risk given that the community have strongly advocated for this ban. The state and federal Liberals have not listened to them at all.

I am really pleased to be speaking on this bill today. I am so proud of our local communities right across the Geelong region who have put in probably more than four years of hard yards and lobbying to see this bill come to fruition. I congratulate them. I congratulate the ministers involved and the Premier for the hard work they have done. I commend the bill to the house.