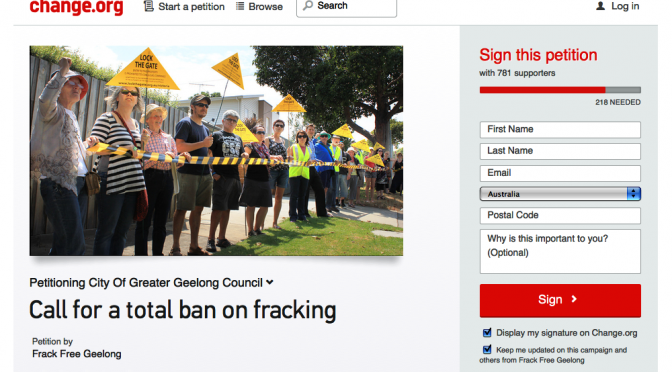 Tuesday 14 October will see the handing over of a petition to mayor Lyons calling for a permanent ban on gas mining, and a decision on fracking made by City of Greater Geelong’s 13 councillors.

Frack Free Geelong representatives Chris Johnson and Anthony Gleeson expressed a huge vote of appreciation for the 1,170 residents who signed the petition calling for a permanent ban on fracking within the City of Greater Geelong Council area. Most of these these signatures were collected over the last six weeks when Council had called for submissions on this topic from residents.

“The petition shows a resounding lack of support for this extreme form of energy creation in this area. People have understood that we don’t have to go down this path. We now have clean and safe alternatives that aren’t going to cost us the earth, literally,” said Frack Free Geelong spokesperson Anthony Gleeson.

“The solutions to our carbon emissions crisis already exist in clean renewable energy sources like wind and solar which, when embraced, as well as reducing our emissions will provide the jobs so badly needed around Geelong at the moment,” said Frack Free Geelong spokesperson Chris Johnson.

“We are hoping that councillors and staff take this petition into account when considering their position on onshore gas extraction Tuesday evening,” added Mr Gleeson.

Decision in Council
Geelong Council received a total of 449 submissions about fracking. Of these 447 were opposed to onshore gas extraction and in particular the use of hydraulic fracking.

At an ordinary meeting of Geelong Council held on Tuesday 14 October 2014 at the Council Conference and Reception Centre in City Hall – at Little Malop Street in Geelong, commencing at 7:00pm – councillors will make a decision on the municipality’s official stand on fracking, voting on a report produced by Council’s officers regarding the 449 submissions.

“We hope to see many of our region’s fracktivists attending this meeting,” said Ms Johnson. “We need to let the councillors know that we are concerned about how each of them vote about this issue.”

10 of the submissions were included in the report document for the councillors to read. The council report recommends that councillors,

2) write to the Victorian government requesting an indefinite extension to the existing moratorium until;

a) the Victorian Government carry out extensive community consultation in potentially affected Geelong communities and;

b) undertakes research into any potential social, economic and environmental and health impacts of unconventional gas exploration and development; and

c) there is broad community support for the development of an onshore gas industry; and

3) write to the Victorian and Federal governments requesting support for the development of renewable energy sources to replace fossil fuels in the provision of heating, cooling and power.

“To request an indefinite extension to the existing moratorium in Victoria until there is broad community support for the development of an onshore gas industry, in our view in reality is the same as to ask for a permanent ban, because there will never be broad community support for fracking in Geelong, or anywhere in Victoria. Each month, the renewable energy technologies are getting cheaper and better, whereas gas prices will only keep rising,” Mr Gleeson explained.

Gasfield Free Declaration Day
On Sunday 14 September, the communities of Moriac, Mount Moriac, Paraparap and Freshwater Creek – just to the west of Geelong – declared themselves a ‘gasfield free’ zone, based on a community survey which showed that 9 out of 10 residents opposed fracking. They were joined by all election candidates for South Barwon who praised the communities for taking this important stand.

“With the event in Moriac in mind, and with a decision in Geelong Council which follows the recommendation, we can start planning for a Gasfield Free Declaration Day, possibly for both City of Greater Geelong and Surf Coast Shire as a united front against this invasive gas industry, where we also can give proper thanks to Lock the Gate, Friends of the Earth, and Yes2Renewables, who have supported Frack Free Geelong all the way in this year-long campaign,” said Ms Johnson. 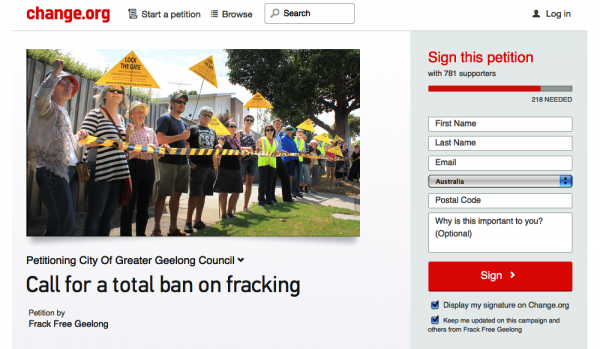 To: City Of Greater Geelong Council

Frack Free Geelong calls on the City of Greater Geelong council to recognise the community’s concern about coal seam gas and other forms of unconventional gas mining and advocate for the prevention of further gas exploration and mining in the area.

Frack Free Geelong recommends the Council to move a motion similar to the following:
1) That Council advocates to the state and federal governments for a ban on new gas exploration and mining/extraction in the City of Greater Geelong until it is proven to be safe.

2) That Council works with the community to stop onshore gas exploration, extraction or mining by keeping the community up to date with all relevant information as it becomes available, and by providing resource support to community groups.

3) That Council opposes onshore gas exploration, extraction, mining or infrastructural work on land it owns or manages until it is proven to be safe.

4) That Council incorporates this position into its Environmental Management Strategy.

5) That Council supports a motion at the state council of the Municipal Association of Victoria (MAV) calling on all municipalities in Victoria to oppose the exploration for and extraction of gas within the state.

» See the online petition on: www.change.org

Frack Free Geelong are a community group concerned about the risk that coal, coal seam gas, tight gas and shale gas exploration will have on Geelong, Bellarine Peninsula and the Surf Coast. The group currently consists of approximately 700 concerned citizens in the Geelong region.