At a public information night on Thursday 18 September 2014 a motion was put and debated that Councillor Stretch Kontejl who was present would take to the City of Greater Geelong Council the following short but absolute resolution:

“We, the citizens of City of Greater Geelong, insist that both our local and state government ban onshore gas extraction (fracking) permanently once and for all: No fracking ever.”

A motion to put forward a five year extension to the existing state moratorium was voted down. 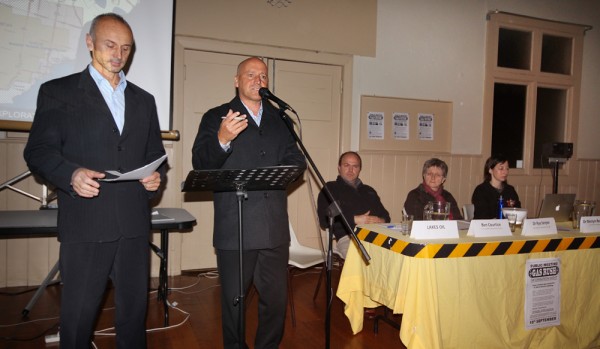 The public meeting about onshore gas extraction was held in Manifold Heights Baptist Church on Thursday 18 September 2014 at 7pm. It was chaired by Michael Martinez, CEO, Diversitat, and approximately 80 citizens, candidates, politicians and one councillor from Geelong participated.

More information about the program of the evening on www.climatesafety.info/gasrush

An audio recording from the meeting of the debate about the resolution is broadcasted on 94.7 The Pulse on Wednesday 24 September 2014 at 11:05am. It will be available on www.climatesafety.info/thesustainablehour44 and in The Sustainable Hour’s podcast in iTunes on Friday 26 September 2014.