Frack Free Geelong has set up a petition to urge the Council to make a clear stand on the issue of gas mining in our area. If you would like to sign it, go to www.frackfreegeelong.org/petition

Frack Free Geelong members have literally put their bodies on the line, marking out the edge of the PEP163 gas exploration license in the heart of Highton to get the City of Greater Geelong’s attention.

More than two dozen anti-fracking protesters lined up from the corner of Barabool Road and Marcus Street, Highton, to demonstrate with hazard tape the exploration license’s proximity to schools and homes.

Frack Free Geelong spokeswoman Elizabeth Packett said the purpose of the event was to raise awareness about how much the license was infringing on the urban environment, and to urge Geelong council to take a stand on gas mining in the area.

To date the council has not stated its position on the issue and the citizen group has urged councillors to do so. The state moratorium against fracking, which runs until June 2015, does not protect Geelong and the Surf Coast from exploration drilling.

“We need to know that the council is taking the threat to Geelong residents seriously, and will represent us by calling on the resources minister to remove residential areas, as well as water catchment areas such as the Anglesea borefield, from the exploration license,” said Ms Packett.

“Colac Otway and Surf Coast councils have already expressed their concerns about the industry to the minister. We need to know where Geelong council stands.”

“Fracking has me terrified, there is just no other way to put it,” Cr Fisher said.

“To think that residents in Waurn Ponds and Highton – as well as much of Surf Coast Shire – may have fracking wells on their door steps beggars belief.”

Cars tooted their support as the Frack Free Geelong members made their way along Barabool Road and up Marcus Street.

“This industry is on, and even over, our doorsteps. We were shocked to find that the current PEP163 exploration license goes over suburban and residential areas of Geelong, and covers parts of Waurn Ponds and Highton,” said Ms Packett.

Frack Free Geelong calls on the City of Greater Geelong council to recognise the community’s concern about coal seam gas and other forms of unconventional gas mining and advocate for the prevention of further gas exploration and mining in the area.

Frack Free Geelong recommends the Council to move a motion similar to the following:

1) That Council advocates to the state and federal governments for a ban on new gas exploration and mining/extraction in the City of Greater Geelong until it is proven to be safe.

2) That Council works with the community to stop gas exploration, extraction or mining by keeping the community up to date with all relevant information as it becomes available, and by providing resource support to community groups.

3) That Council opposes gas exploration, extraction, mining or infrastructural work on land it owns or manages until it is proven to be safe.

4) That council incorporates this position into its Environmental Management Strategy which is currently out for public comments. 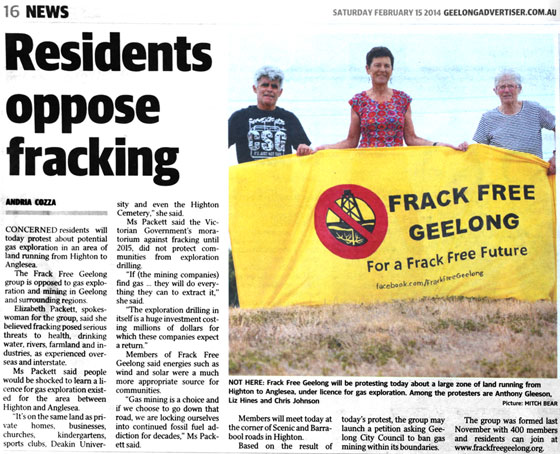 Group urges council to show its stance on fracking

About the Surf Coast Motion

Frack Free Geelong commends the Surf Coast Shire Council and Barwon Water for taking the concerns of their constituents seriously.

Frack Free Geelong congratulates both the Surf Coast Shire Council and Barwon Water for their recent public statements of concern about the negative impacts which they believe the exploration and extraction of unconventional gas will have in our area.

Now we would like to see the City of Greater Geelong council, and Barwon Health along with Barwon Water make a very clear stand against this practice.

About the Environmental Management Strategy 2013-2017

The City of Greater Geelong council is currently drafting their Environmental Management Strategy 2013-2017, but as yet, there is no mention of gas mining within this paper. Frack Free Geelong encourages all citizens who understand that this is an important strategy document for Geelong, and who are concerned abut the environmental impacts of fracking in our region, to send a personal message to the Council asking them to consider adding a section about the Council’s position on fracking.

» It can be as simple as sending an email to: environment@geelongcity.vic.gov.au

» Or go to this page and fill in the form: www.geelongaustralia.com.au/council/yoursay/consult/item/8d0cae103b24f87.aspx

» Before submitting a response, take a look at the draft strategy paper here:  ‘Environmental Management Strategy 2013-2017’